For me, there is one moment in Gillette’s new ad, which dropped yesterday to tumultuous controversy, that summarises why it is so culturally important. That defining moment comes about a minute in.

A woman is walking along the street; she looks like she’s had a day. A man sees her and makes a move to follow her, but just as he does, his friend puts a gentle but firm hand on his chest, his expression more bewildered than aggressive. ‘No. Not cool, not cool’ he says, pushing the other man back. The woman does not even know that this has happened, she gets to walk past uninterrupted. She doesn’t have to think about what might have happened. The only people who have to think about it are the man who initiated the action, and the man who stopped it. 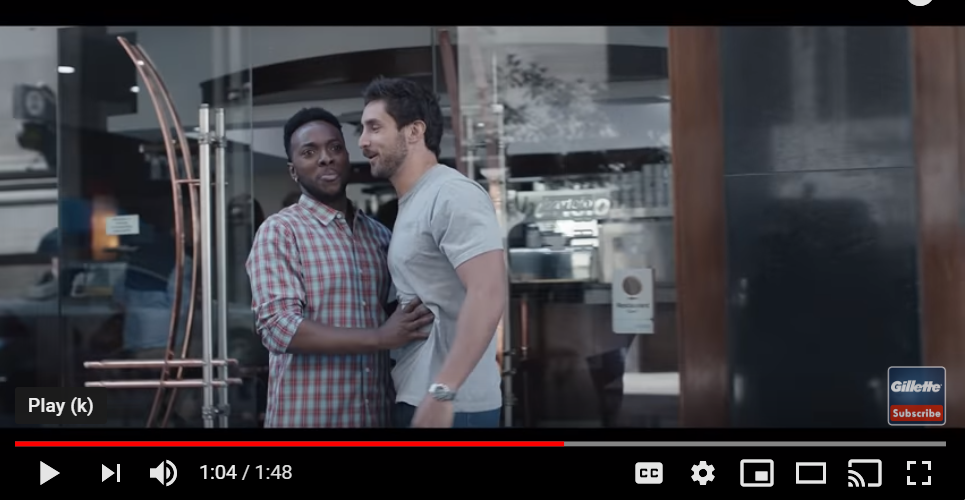 The previous scene, with a similar confrontation at a pool party, is tonally not quite right. The women look on admiringly at their defender, and there is a suggestion that there might be a fight in the offing; this is the chivalry of old, with men stepping in to defend the honour of women, whether they need it or not. But this moment outside the coffee shop is perfect, because it shows that what is at stake, in this conversation about modern masculinity, is actually all about invisibility.

Over the course of this year, we’ve had to do quite a few projects, from a variety of different clients, on the question of ‘modern masculinity’ – what it means, what it could look like, what it should mean. This is incredibly telling, because it says that people do not know what it means to be a man anymore.

This has come up both as an answer within projects, and as a meta-analysis of the types of projects that we are looking at. The rules have definitely been changing, but no one seems sure what they are changing to. This is the conversation Gillette have stormed into, and they’ve picked a bold moment to do it. But I think that actually, Gillette are exactly the people who should be having this conversation, and whilst their advert is not perfect, I think it is the first thing I’ve seen that’s come close to navigating this tricky territory. As Grayson Perry says in The Descent of Man;

“How we talk about masculinity might be just as important, if not more so, than what we say. The very idea that there is a strict set of rules needs to be chucked away.”

One of the critiques of this advert, which feels like it’s come from the Alan Sugar school of marketing, is that: ‘it doesn’t mention shaving enough’, or ‘you don’t see enough razors. Honestly, this feels lazy to me. We know what Gillette are. We know what they sell. That is the advantage of being a brand with this kind of heft; you have the luxury of not having to wave your product around. But moving beyond this, I would argue that shaving is exactly what frames this advert, from start to finish.

The opening shot is a man unable to meet his own eyes whilst staring into a bathroom mirror. The shots then cut between a variety of male faces, all standing in bathrooms, all looking into the mirror. The voiceover: ‘is this is the best a man can get?’ This moment is a common trope from pop culture, the idea that seeing your own reflection can prompt an introspective moment which makes you question who you are, and how your behaviour has been reflecting that. It is often a turning point in the film. Gillette is taking a moment which they have access to, as a shaving brand, and reframing it as a cultural turning point. 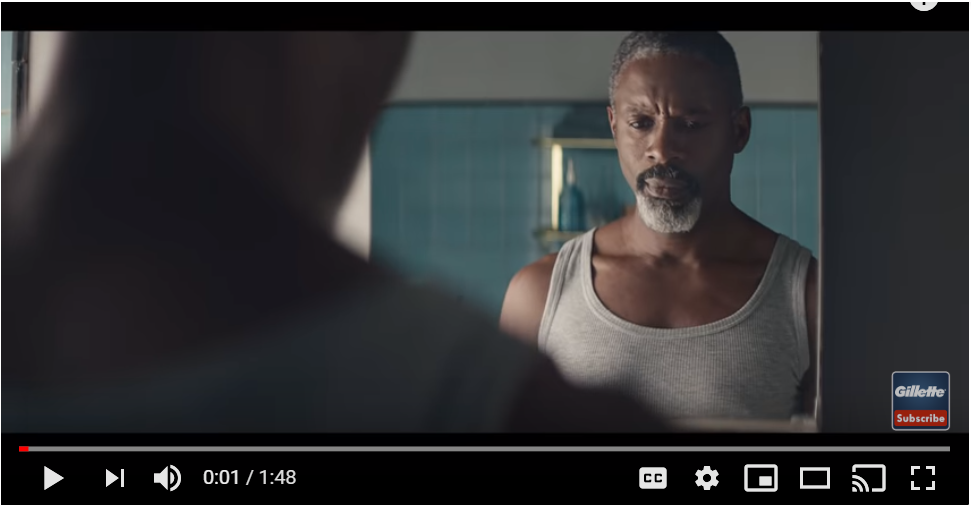 There is more to it than this, though. Shaving is in itself an incredibly rich territory, because it is one of the few spaces that has always been about male aesthetic and identity. Masculinity has always been a moving target, something defined in opposition, and facial hair is a crucial part of this. If you want to define being a man as ‘not-woman’, then having a beard is a good way to do this; facial hair as symbolic of virility. If, however, you want to define being a man as ‘not-boy’, then shaving is a crucial space for this. Growing hairs is seen as a symbol of puberty, of encroaching masculinity, (Netflix’s Big Mouth explores this really well), and having enough to actually shave off is a step into adulthood.

Grayson Perry thinks that the crisis of masculinity partially stems from a lack of formalised coming-of-age rituals. We don’t send boys into the forest for a night any more, or make them wear gloves full of biting ants, until they ‘come back men’. But there are still places in modern societies where these kind of rituals are enacted. We teach boys to shave. What are they taught, at the same time? The boys who look out at us at the end of the advert are still working out what it means to be a man. What are they going to be taught, when they're taught to shave?

There have been a lot of conversations in the past about brand purpose and brand permission. Another critique of this advert is that Gillette have taken brand purpose too far, that they do not have permission to play in this space. I refute that. I think ritualised male grooming is a battle-ground, and this is the conversation I want people to be having inside it. But more than that. On their website, Gillette say:

"It’s time we acknowledge that brands, like ours, play a role in influencing culture. And as a company that encourages men to be their best, we have a responsibility to make sure we are promoting positive, attainable, inclusive and healthy versions of what it means to be a man. With that in mind, we have spent the last few months taking a hard look at our past and coming communication and reflecting on the types of men and behaviors we want to celebrate."

This is why Gillette are like Spiderman. Because I don’t think we should be talking about brand purpose any more. I think we should be talking about brand responsibility. Advertising culture has been shaping our world for years. Gillette’s own adverts have contributed to narratives of toxic masculinity, to sexist attitudes in the workplace, to not creating spaces for vulnerability. They have a responsibility to fix this because they have helped caused this, but they also have a responsibility to do this because they have a voice, and a platform, and a space in people’s lives. With great power comes great responsibility. So when people critique Gillette for ‘not thinking enough about selling their product’ and simultaneously for ‘not giving enough to charity’ they are missing the point. I do not know what battles had to be fought with shareholders to get even that $1 million a year to be given to charities, but I’m glad those battles were fought. It may not be perfect, but it is a start. 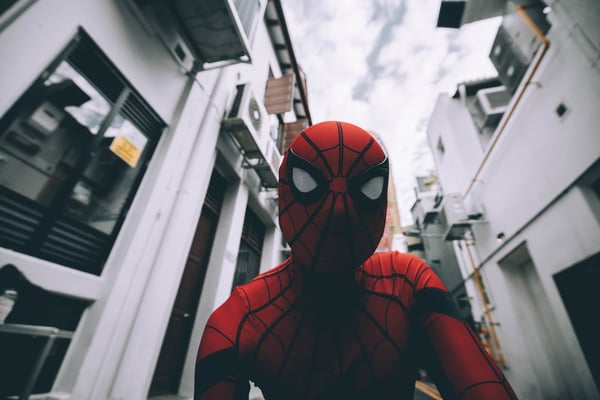 Gillette is like Spiderman because it is realising that it has immense cultural power, and access to important spaces in men’s lives, and that therefore it has a responsibility to use that power. It is also like Spiderman because it doesn’t always get it exactly right – he would often accidentally destroy buildings in his quest to save people. But he would admit he was wrong, and try to do better next time. But there is one final way that this campaign is learning from Spiderman, and for me, as a woman, this is the most important. This comes back to the question of invisibility.

The whole way through this piece I have been concerned with the question of looking. When you look into the mirror, who do you see looking back at you? There is a famous quote from John Berger: ‘Men look at women. Women watch themselves being looked at’. In the moment I called out at the start of this article, the opposite is happening. We watch the man look at the woman, and she gets to walk past, without having to watch herself being looked at. She will never know that she was spared a negative moment by the second man, and that is a second, glorious freedom. For that moment, the second man is Spiderman; he did something good, but no one will ever know that it was him.

Except that we know, because Gillette has put it in their advert. And this is important too, because this is men looking at men – holding each other accountable, as per the Terry Crews quote. Just as Spiderman became an inspirational figure for the boys in the films, so the men in this advert have to consider the boys who are watching and learning from them. You don't see the bullied boy gratefully thanking the man who saved him (or even defensively shrugging him off) - instead the camera focuses on the son who learns from this moment. 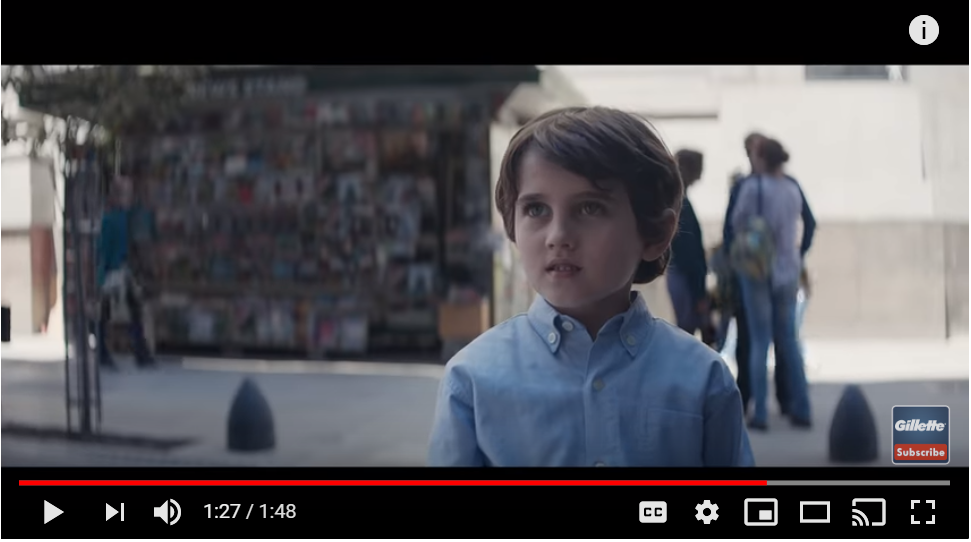 But it does even more than this. There are other power structures at play, there are different structures rendered visible. It is so important that it is an African-American man who is stopping his friend from acting as a predator, and not the other way around. Toxic masculinity is full of tiny, invisible moments – with this advert, Gillette is changing which ones are visible and which ones aren’t.

This advert is not perfect. Gillette is not perfect. They’re probably still charging more for women’s razors than they are for men’s, and it will be very interesting to see where they go from here. But right now, I don’t need them to be perfect. I don’t even need them to sell razors. What they have done is used the immense cultural power that they have to shape the conversation about masculinity in a way that abandons old rules and creates a space for the new ones to flourish.

There are some valid critiques to be made of exactly how they have done this – and its savviness as a business decision is another question altogether. But if you felt personally attacked by this advert and its message – well maybe it’s time to have another look in the mirror...

Written by Hannah Marcus
With a background in semiotics and a newly-acquired MA in Cultural Studies, Hannah is almost too excited by overlaps in technology and feminism. Her hobbies include ballroom dancing and talking about her period.
LinkedIn Twitter

More from our blog

We all know how cringe feels, but what does cringe really mean? What in our online worlds can...

Stories From the Edge

There has been a well documented impact on financial behaviours due to the pandemic and lockdown...

We bought a Dyson robo-cleaner recently and unsurprisingly it’s proved to be a really useful...

While fandoms and subcultures are by no means new phenomena, social media and online culture have...

Over the last few months, we’ve been exploring the world of ‘Alternative Diets’, and why people...

We are Aura Innovation Award Finalists

We're incredibly proud that our NeedDriver Mapping methodology has been shortlisted for the...

The landscape of pleasure; where and how we find moments of joy and experience pleasure is ever...

The Future of Immersiveness

The pandemic has turned everything upside down in the past year. During the crisis, people were...

Over the last 3 years, we’ve worked on over 50 projects for clients, where the central question...

In our latest report we have taken a step back to stop and think.. to reflect on these last months...

We are MRS Award Finalists for our Healthcare Research

We're incredibly proud of a recent piece of work completed for the Women's Health Tech Hive,...

by Cathy Maisano   In 1886, Carl Benz patented the first three-wheeled automobile. A couple of...